In January my husband and I spent 3 weeks travelling the back roads of New Mexico. They call it the Land Of Enchantment.

There are old souls in the ancient ruins, in the crumbling, rust-coloured cliffs, in the canyons and empty plains where we saw elk and wild horses. 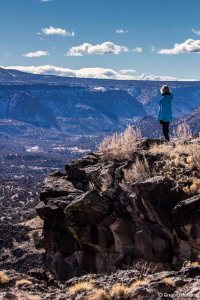 One day I was standing on an outlook near White Rock with the Rio Grande a thousand feet below. You could see for a hundred miles.

I have never experienced such stillness. The air seemed to vibrate with it.

I thought I heard something. Not a sound exactly. Almost a sigh. I followed it to the lip of the canyon.

There was no wind and no movement in the trees. But there was a presence. And it was something I recognized.

Time dissolved. I felt a sense of absolute peace and belonging. And I knew I had found a Thin Place.

New Mexico is known for them, but the term originated in Ireland. The Celts believed that heaven and earth are only 3 feet apart. In Thin Places, they are almost touching.

There are Thin Places all over the world: Italy, Istanbul, Nepal, the Amazon, the American Southwest. They are considered to be sacred sites, and people make pilgrimages to them hoping for spiritual transformation or miracles.

Some are hoping to stand on the threshold of heaven and glimpse the face of God.

No one has come up with a satisfactory explanation for Thin Places. Psychologists have tried, physicists and Earth scientists have tried.

Theologians have tried for centuries but lost their argument when it was discovered that both the faithless and the devout can be transported by the near presence of the divine.

Poets probably come the closest to articulating the mystery of Thin Places. But it always breaks down in the same place. The ineffable can’t be put into words.

I’m happy to leave it at that. We all need to get bumped out of our orbit now and then. A dose of the inexplicable reminds us that we don’t really know much of anything. It opens the flaps of our minds.

You don’t have to be a saint or a psychic to experience Thin Places. You just have to be still.

There are Thin Places everywhere. In own back yards. In a pot of crocuses on the windowsill. In a winter sunset while you are waiting for a traffic light to change. Or in the morning when you are standing at the kitchen sink with a cup of coffee and the rest of the house is still asleep.

You’re not thinking about anything. Your mind is empty, and you are still.

You feel a sort of shimmer. Something opens inside you, and for a moment you are filled with a wordless wonder. You know that you are in the presence of something vast and eternal, and that you are part of it.

Heaven is never far from earth. That is the divine mystery of Thin Places. They take us joyously out of our depth, and remind us of where we belong in the great family of things.

It’s a recognition of kinship. Human beings share DNA with every living thing on Earth. We are all part of everything. Part feather, part tree, part bone.

That is the daily miracle of our lives. That is what saves us.